Anxiety UK At The Palace

The Master of the Household has received Her Majesty’s command to invite Mr David Smithson to a reception to be given at Buckingham Palace to acknowledge the contribution of those working in the mental health sector in the UK.

Wow! That was an amazing letter to receive and one that started a real buzz in the office the day it arrived.

The reception was to be hosted by Their Royal Highnesses, The Duke and Duchess of Cambridge and HRH Prince Harry of Wales on World Mental Health Day and was further evidence of their commitment to tackling the stigma associated with mental well-being.

Duly suited and booted, I arrived at the palace at the appointed time and soaked in the atmosphere outside with the tourists until the gates were opened for the chosen few to enter the grounds. It was amusing watching the tourists taking their selfies gaze in envy at the guests in their finery, arriving and being ushered into the forecourt by security officials, reminding us that selfies were not allowed inside the palace grounds!

On entering the palace we were asked to deposit all cameras/phones in the cloakroom and to proceed to the hall where we treated to champagne, soft drinks and nibbles to await the arrival of our hosts.

As expected the room was full of people form a wide range of charities working in the mental health sector accompanied by some of the great and good in the field. I spotted one of our patrons – Ruby Wax – and took the opportunity to introduce myself and was delighted when she proudly announced to me she was one of our patrons! Looking around the room, I spotted a lady who I thought was the spitting image of Angela Rippon only to then see Dame Esther Rantzen glide over to her and say Hi Angela- I was right! Other luminaries present included Alastair Campbell, Norman Lamb MP, Andrew Mitchell MP and a very special guest – more of whom later.

Then came the moment we had all been waiting for – Kate’s first public appearance since the announcement of her third pregnancy! Well that was the way many of the tabloid media reported the event. But more seriously, HRH Prince William welcomed us to the Palace and spoke eloquently about why Harry, Kate and himself were so passionate about their work in this field and how they wanted on this special day to mark and recognise the work being done by the voluntary sector in the UK.

We were then treated to a special guest appearance from none other than the comedian, actor, writer, presenter and campaigner Stephen Fry who delivered as you would expect an inspirational speech mixing both humour and a serious message with aplomb. Our hosts then spent time “working the room” and meeting various groups of people to hear about their own experiences and the work they are doing in their respective fields.

With more than 500 people present – all of whom wanted the opportunity to share with a Royal ear the work they were engaged in – access was carefully stage managed by their Highnesses courtiers (bouncers to you and I!) and the opportunity to actually to speak to one of the hosts was thwarted despite my best efforts.

Nevertheless, it was a wonderful evening and I was proud to be there to represent the staff, trustees, volunteers, members and anyone who has accessed support from Anxiety UK on such a special occasion.

Dave Smithson is the charity’s Services Manager, responsible for the oversight of Anxiety UK’s roster of therapists as well as the charity’s therapy service provision. Dave works closely alongside the Membership Manager to ensure that those seeking to benefit from the charity’s services receive the support they need.

Maintaining a Healthy Mindset When Faced with Challenges

by Louise Pode, Managing Director, ProAbility "Whether you think you... 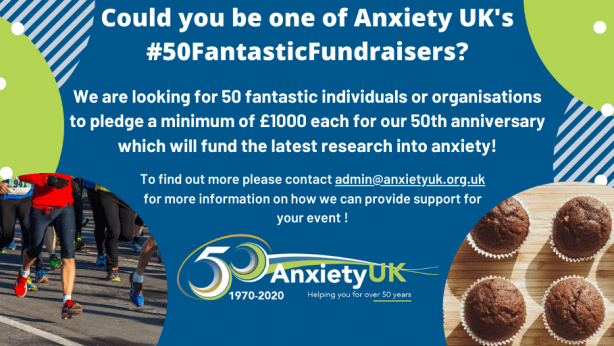 This year Anxiety UK is proud to be celebrating its...